“Why should I even consider the books of the Bible? It was written so long ago, and has had so many translations and revisions done to it – I have heard that its original message was changed over time.”  I have heard questions and statements like this many times about the books of the Taurat, Zabur and Injil that make up al Kitab or the Bible.

This question is very important and is based on what we have heard about al Kitab/the Bible. After all, it was written two thousand plus years ago. For most of this time there has been no printing press, photocopy machines or publishing companies. So the original manuscripts were copied by hand, generation after generation, as languages died out and new ones arose, as empires crumbled and new ones were born. Since the original manuscripts are no longer in existence how do we know that what we read today in al Kitab (the Bible) is what the original prophets actually wrote long ago? Apart from religion, are there any scientific or rational reasons to know whether what we read today is corrupted or not?

Many who ask this do not realize there is a scientific discipline, known as textual criticism, by which we can answer these questions.  And because it is a scientific discipline it applies to any ancient writing.  This article will give the two main principles used in textual criticism and then apply them to the Bible.  To do so we start with this figure which illustrates the process by which any ancient writing is preserved over time so that we can still read it today. 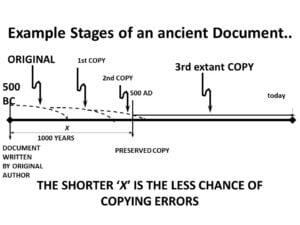 A timeline showing how all ancient books come to us today

This diagram shows an example of a  book written 500 BC. This original however does not last indefinitely, so before it decays, is lost, or destroyed, a manuscript (MSS) copy of it is made (1st copy). A professional class of people called scribes did the copying work. As the years advance, copies are made of the copy (2nd copy & 3rd copy). At some point a copy is preserved so that it is in existence (extant) today (3rd copy). In our example diagram this extant copy was made in 500 AD. This means that the earliest that we can know of the state of the book is only from 500 AD onwards. Therefore the period from 500 BC to 500 AD (labeled x in the diagram) is the period where we cannot make any copy checks since all manuscripts from this period have disappeared. For example, if corruptions occurred when the 2nd copy was made from the 1st copy, we would not be able to detect them as neither of these documents are available to compare against each other. This time period before the existing copies (the period x) is thus the interval of textual uncertainty – where corruption could have happened.  Therefore, the first principle of textual criticism is that the shorter this interval x is the more confidence we can place in the correct preservation of the document to our time, since the period of uncertainty is reduced.

Of course, usually more that one manuscript copy of a document exists today. Suppose we have two manuscript copies and in the same section of each of them is the following phrase (Of course it would not be in English, but I use English to explain the principle): 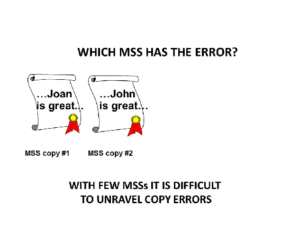 This shows a variant reading (one says ‘Joan’ and the other says ‘John’) but with only a few manuscripts it is difficult to determine which is the one in error.

The original author had either been writing about Joan or about John, and the other of these manuscripts has an error. The question is – Which one has the error? From the available evidence it is very difficult to decide.

Now suppose we found two more manuscript copies of the same work, as shown below: 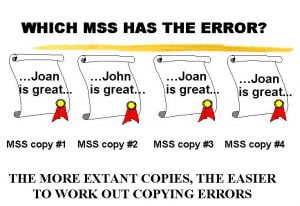 Now it is easier to decide which manuscript has the error. It is more likely that the error occurs once, rather than the same error repeated three times, so it is likely that MSS #2 has the copy error, and the author was writing about Joan, not John. ‘John’ is the corruption.

This simple example illustrates the second principle in textual criticism: The more manuscripts that exist today the easier it is to detect & correct errors and know what the original said.

So now we have two principles that of scientific textual criticism that are used to decide the textual reliability of any old book: 1) measuring the time between original writing and earliest existing manuscript copies, and 2) counting the number of existing manuscript copies. Since these principles apply to all ancient writing we can apply them to both the Bible as well as other ancient books, as done in the tables below (Taken from McDowell, J. Evidence That Demands a Verdict. 1979. p. 42-48).

* from any one work

These writers represent the major classical writers of ancient times – the writings that have shaped the development of modern civilization. On average, they are passed down to us by 10-100 manuscripts that are preserved starting only about 1000 years after the original was written.

The following table compares the Biblical (Injil in particular) writings along these same points (Taken from Comfort, P.W. The Origin of  the Bible, 1992. p. 193).

The number of New Testament manuscripts is so vast that it would be impossible to list them all in a table. As one scholar who spent years studying this issue states:

“We have more than 24000 MSS copies of portions of the New Testament in existence today… No other document of antiquity even begins to approach such numbers and attestation. In comparison, the ILIAD by Homer is second with 643 MSS that still survive” (McDowell, J. Evidence That Demands a Verdict. 1979. p. 40)

A leading scholar at the British Museum agrees with this:

“Scholars are satisfied that they possess substantially the true text of the principal Greek and Roman writers … yet our knowledge of their writings depends on a mere handful of MSS whereas the MSS of the New Testament are counted by … thousands”  Kenyon, F.G. (former director of British Museum) Our Bible and the Ancient Manuscripts. 1941 p.23

I own a book about the earliest New Testament documents. It starts with:

In other words, many of these existing manuscripts are very early, merely a hundred years or so after the original writings of the New Testament.  These manuscripts come earlier than the rise to power of Constantine and the Roman church.  And they are spread across the Mediterranean world.  If some from one region were corrupted we would see the difference by comparing it with manuscripts from other regions.  But they are the same.

So what can we conclude from this? Certainly at least in what we can objectively measure (number of extant MSSs and time spans between original and earliest extant MSS) the New Testament (Injil) is supported much more than any of the other classical writings.  The verdict to which the evidence pushes us is best summed up by the following quote:

“To be skeptical of the resultant text of the New Testament is to allow all of classical antiquity to slip into obscurity, for no other documents of the ancient period are as well attested bibliographically as the New Testament”  Montgomery, History and Christianity. 1971, p.29

What he is saying is that to be consistent, if we question the reliability of al kitab (the Bible) we may as well discard all that we know about classical history in general – and this no historian has ever done. We know that the Biblical texts have not been altered as eras, languages and empires have come and gone since the earliest existing MSSs come before these events. For example, we know that no pope or the Roman Emperor Constantine changed the Bible since we have manuscripts that are earlier than Constantine and the popes and all these earliest manuscripts contain the same accounts.   The manuscripts used to translate Bibles today come before the time of the Prophet Mohamed PBUH, and the fact that he confirmed the Bible as he found it in his day is significant since we know just from the manuscripts used that it has not changed from his day.

This is shown in the following timeline where the manuscript sources that are used in translating modern Bibles are shown to come very early.

Modern Bibles are translated from the earliest existing manuscripts, many from 100-300 AD. These source manuscripts come long before Constantine or other religious-political powers, and before time of Prophet Mohamed PBUH

To summarize, neither time nor Christian leaders have corrupted the original ideas and messages that were first placed into the original writings of al kitab or the Bible. We can know that it today accurately reads what the authors actually wrote from the many thousands of early manuscripts that we have today.  The science of Textual criticism supports the reliability of al Kitab (the Bible).

I had the privilege to give a public lecture on this topic at the University of Western Ontario in Canada not too long ago.  Below is a 17 minute video of the part of the lecture that covers this question.