The Prophet Isa al Masih (PBUH) & the sign of Jonah

The Quraysh (or Quraish) was the Arab tribe that controlled Mecca and the Kaaba, and was the tribe that the prophet Mohamed PBUH was from.  Surah Quraysh (Surah 106 – Quraysh) describes the favourable covenants the Quraysh enjoyed:

For the covenants (of security and safeguard enjoyed) by the Quraish, Their covenants (covering) journeys by winter and summer (Surah Quraysh 106:1-2)

But Surah Yunus (Surah 10 – Jonah) recounts what happened when the prophet Mohamed took the message to the Quraysh.

Is it a matter of wonderment to men that We have sent Our inspiration to a man from among themselves?- that he should warn mankind (of their danger), and give the good news to the Believers that they have before their Lord the lofty rank of truth. (But) say the Unbelievers: “This is indeed an evident sorcerer!” (Surah Yunus 10:2)

In rejecting his message, Surah Al-Qamar (Surah 54 – The Moon) warned the Quraysh that they faced…

Are your Unbelievers, (O Quraish), better than they? Or have ye an immunity in the Sacred Books?

Or do they say: “We acting together can defend ourselves”?

Soon will their multitude be put to flight, and they will show their backs.

Nay, the Hour (of Judgment) is the time promised them (for their full recompense): And that Hour will be most grievous and most bitter. (Surah Qamar 54:43-46)

Surah Yunus also explains that though most prophets had been ignored by their listeners (as with the Quraysh), there was an exception – the Prophet Jonah (Yunus) PBUH.

Why was there not a single township (among those We warned), which believed,- so its faith should have profited it,- except the people of Jonah? When they believed, We removed from them the penalty of ignominy in the life of the present, and permitted them to enjoy (their life) for a while. (Surah Yunus 10:98)

The Prophet Jonah was sent to a foreign people.  Yet they still received his message.  But he had not accepted his role and in trying to run from it had been swallowed alive by a great fish.  Surah Al-Qalam (Surah 68 – The Pen) describes how in the fish he repented of his own disobedience and was reinstated as Prophet.

So wait with patience for the Command of thy Lord, and be not like the Companion of the Fish,- when he cried out in agony.

Had not Grace from his Lord reached him, he would indeed have been cast off on the naked shore, in disgrace.

Thus did his Lord choose him and make him of the Company of the Righteous. (Surah Al-Qalam 68:48-50)

Isa al Masih’s authority questioned by his own people.

We saw how the Injil records the teachings, healings and miracles of the Prophet Isa al Masih (PBUH).  He often gave invitations to his listeners (and to us) to receive what he offered.  He offered ‘living water’, mercy to sinners, finding the ‘lost’, and invited all who were willing to enter the ‘Kingdom of God’.

38 Then some of the Pharisees and teachers of the law said to him, “Teacher, we want to see a sign from you.”

39 He answered, “A wicked and adulterous generation asks for a sign! But none will be given it except the sign of the prophet Jonah. 40 For as Jonah was three days and three nights in the belly of a huge fish, so the Son of Man will be three days and three nights in the heart of the earth. 41 The men of Nineveh will stand up at the judgment with this generation and condemn it; for they repented at the preaching of Jonah, and now something greater than Jonah is here.  (Matthew 12:38-41)

Isa al Masih (PBUH) answered by pointing to the prophet Jonah (also called Yunus or Yunis).  You can see in the timeline below that the prophet Yunus lived about 800 years before the Prophet Isa al Masih. 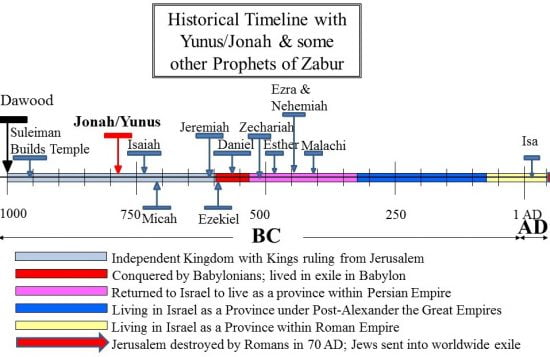 Yunus PBUH wrote a book that is in the Prophetic writings. The Quran summarizes his book like this:

And indeed, Jonah was among the messengers. when he ran away to the laden ship. And he drew lots and was among the losers. Then the fish swallowed him, while he was blameworthy. And had he not been of those who exalt Allah , He would have remained inside its belly until the Day they are resurrected.

Prophet Yunus was swallowed by a huge fish because he ran away from the mission that Allah had given him – to preach repentance to the city of Ninevah (close to modern-day Mosul in Iraq).  Islamic scholar Yusuf Ali says about these ayat

This is just the idiom.  This was to be the burial and grave of Jonah.  If he had not repented he could not have got out of the body of the creature that had swallowed him, until the Day or Resurrection, when all dead would be raised up. (Footnote 4125 of Yusuf Ali translation of Quran)

In other words, being inside the fish was a death sentence that would normally only be released on the Day of Resurrection.

The Prophet Yunus from his own Book

Jonah’s book gives greater details about his time in the fish.  He tells us:

17 Now the Lord provided a huge fish to swallow Jonah, and Jonah was in the belly of the fish three days and three nights.  From inside the fish Jonah prayed to the Lord his God. 2 He said:

“In my distress I called to the Lord,
and he answered me.
From deep in the realm of the dead I called for help, and you listened to my cry.
3 You hurled me into the depths,
into the very heart of the seas,
and the currents swirled about me;
all your waves and breakers swept over me.
4 I said, ‘I have been banished from your sight;
yet I will look again toward your holy temple.’
5 The engulfing waters threatened me
the deep surrounded me; seaweed was wrapped around my head.
6 To the roots of the mountains I sank down;
the earth beneath barred me in forever.
But you, Lord my God,
brought my life up from the pit.

7 “When my life was ebbing away,
I remembered you, Lord,
and my prayer rose to you, to your holy temple.

8 “Those who cling to worthless idols
turn away from God’s love for them.
9 But I, with shouts of grateful praise,
will sacrifice to you.
What I have vowed I will make good.
I will say, ‘Salvation comes from the Lord.’”

Normally we expect that when someone’s authority is challenged, as the Prophet Isa al Masih was, he would prove himself with a Sign showing power, victory or success. But Isa al Masih defended his authority by referring to the Prophet Jonah’s 3 days ‘in the realm of the dead’ – the ‘pit’ or grave. During these 3 days, since Jonah had disobeyed the command of Allah, he had ‘been banished from your sight’ i.e., from the sight of Allah. The episode of Jonah in the grip of death for 3 days in the black depths, banished from Allah, is not a sign we expect. Why would Isa al Masih choose a sign that seems to cancel his authority?

This is not the first time weakness and death is given as a Sign.  The prophet Isaiah had prophesied the Coming Servant.  Isaiah prophesied that this Servant would be ‘despised’ and ‘rejected by men’ and would be ‘considered punished by God’ and would be ‘cut off from the land of the living’ and be ‘assigned a grave with the wicked’.  Stranger still, it was “the Lord’s will to crush” the Servant.  That sounds much like what Jonah went through – and thus what Isa al Masih pointed to.

The clue that brings understanding is the end of Jonah’s prayer in the fish’s belly.  The last phrase of his prayer was “Salvation comes from the LORD”.  We saw how the name ‘Isa/Jesus’ was the prophetic name of the coming Branch. But what does the name ‘Jesus/Isa’ mean?  In Hebrew it means ‘The LORD saves’.  In his prayer the prophet Jonah confessed that he (and we) need to be ‘saved’ and that it is the LORD who will do it.  His prayer declared both our need (to be saved) and Allah as the one who does the saving. The name of Isa al Masih (Yhowshuwa in Hebrew) literally means same truth that Jonah in the fish finally acknowledged since the name Jesus/Isa means ‘The LORD saves’.

The Prophet Isa al Masih ended his conversation with the religious leaders by reminding them that the people of Ninevah (the city where Jonah had been sent to preach) had believed and repented at Jonah’s message – but the leaders who listened to Isa al Masih were not willing to repent.  They were unwilling to acknowledge that they needed saving.  We must examine our own hearts to see if we are like the men of Ninevah (who repented) or the Jewish leaders (who did not).  Which of the two are you?

We continue to follow Isa al Masih to see how this Sign of Jonah is fulfilled and how ‘The LORD saves’ as Isa al Masih’s mission starts its end.