Zabur Closes – with Promise of the Coming Preparer

O thou wrapped up (in the mantle)!

Arise and deliver thy warning!

Finally, when the Trumpet is sounded,

That will be- that Day – a Day of Distress,-

Far from easy for those without Faith. (Surah al-Mudaththir 74:8-10)

Surah Al-Kafirun (Surah 109 – The Disbelievers) pictures the prophet PBUH clearly calling out a different path from the disbelievers.

I worship not that which ye worship,

Nor will ye worship that which I worship.

And I will not worship that which ye have been wont to worship,

Nor will ye worship that which I worship.

The Zabur closes by referring back to the Prophet Elijah PBUH who did exactly as Surah al-Mudaththir and Surah al-Kafirun described.  But the Zabur also looks forward to the coming of another prophet who will be like Elijah and prepare our hearts. We know him as the Prophet Yahya PBUH.

The coming of the Prophet Yahya (PBUH) Foretold

We saw in the Sign of the Servant that the Servant was promised to come. But the whole promise of his coming balanced on an important question. Isaiah 53 began with the question:

Isaiah (PBUH) was predicting that this Servant would not be readily believed, and the problem was not with the message or the Signs of the Servant because they would be precise in timing by cycles of ‘Sevens’ as well as by name and specifying that he would be ‘cut off’. The problem was not that there were not enough signs. No, the problem was that the hearts of people were hard. So someone needed to come before the Servant came to prepare people for his coming. Therefore the prophet Isaiah (PBUH) gave this message about the one who would prepare the way for the Servant. He wrote this message in his book of the Zabur in the following way

A voice of one calling:

“In the wilderness prepare

the way for the LORD;

make straight in the desert

a highway for our God.

Every valley shall be raised up,

every mountain and hill made low;

the rough ground shall become level,

the rugged places a plain.

And the glory of the LORD will be revealed” Isaiah 40:3-5

Isaiah (PBUH) wrote about someone who would come ‘In the wilderness’ to ‘prepare the way for the LORD’. This person would smooth out the obstacles so that the ‘glory of the LORD will be revealed’. But Isaiah did not specify in what way this would be done. 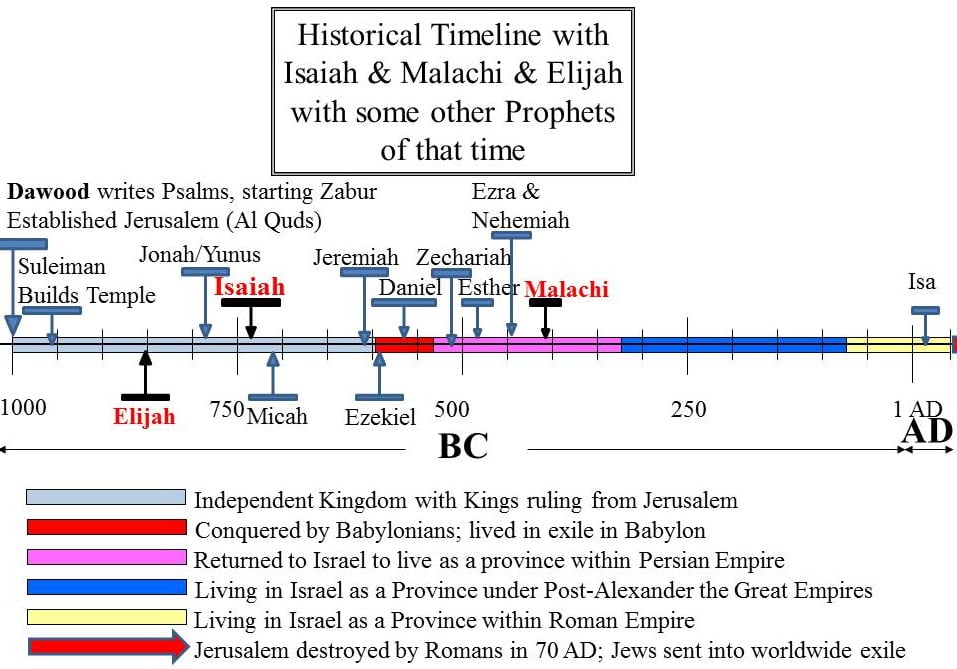 About 300 years after Isaiah came Malachi (PBUH) who wrote the last book of the Zabur. In this last book Malachi (PBUH) elaborates on what Isaiah had said about a coming Preparer. He wrote:

“I will send my messenger, who will prepare the way before me. Then suddenly the Lord you are seeking will come to his temple; the messenger of the covenant, whom you desire, will come,” says the LORD Almighty. (Malachi 3:1)

Here again the messenger who would ‘prepare the way’ is predicted. After this Preparer comes then ‘the messenger of the covenant’ will come. What covenant is Malachi (PBUH) referring to? Remember that the prophet Jeremiah (PBUH) had predicted that Allah would make a new covenant by writing it in our hearts. Only then would we be able to quench our thirst which always leads us to sin. This is the same covenant that Malachi (PBUH) is referring to. The giving of that covenant will be signaled by the coming of the Preparer.

“See, I will send the prophet Elijah to you before that great and dreadful day of the LORD comes. He will turn the hearts of the parents to their children, and the hearts of the children to their parents; or else I will come and strike the land with total destruction.” Malachi 4:5-6

What did Malachi (PBUH) mean by ‘Elijah’ would come before the great day of the LORD? Who was Elijah? He was another prophet whom we have not looked at (we cannot look at all prophets of Zabur since it would make this too long but see him in timeline above). Elijah (PBUH) lived around 850 BC. He was famous for living in the wilderness and wearing garments of animal hair and eating wild food. He probably looked quite peculiar. Malachi (PBUH) wrote that in some way The Preparer who comes before the New Covenant will be like Elijah (PBUH).

And with that statement, the Zabur was completed. This is the last message in the Zabur and was written about 450 BC. The Taurat and the Zabur were full of promises of things to come. Let us review some.

Reviewing the Promises of Taurat & Zabur that were still unfulfilled

What happened after the Zabur was completed

As we saw in the History of the Israelites, Alexander the Great conquered most of the known world in 330 BC and from these conquests the peoples and civilizations of the world adopted the Greek language. As English today has become a universal language for business, education and literature, in that time Greek was similarly dominant. Jewish teachers translated the Taurat and Zabur from Hebrew into Greek around 250 BC. This translation was called the Septuagint. As we saw here, this is where the word ‘Christ’ comes from and we saw here that this was where the name ‘Jesus’ also comes from.

During this time (300 – 100 BC which is the blue period shown in the timeline) there was an ongoing military rivalry between Egypt and Syria and with the Israelites dwelling right between these two empires they were regularly caught up in the battles. Some specific Syrian kings sought to impose the Greek religion (a religion of idol worship) on the Israelites and to eradicate their worship of One God. Certain Jewish leaders led an uprising to defend their monotheism and restore the purity of worship instituted by the Prophet Musa (PBUH). Were these religious leaders the fulfillments of these promises that the Jews awaited? These men, though faithful followers of worship as instructed in the Taurat and Zabur, did not fit the Prophetic Signs. In fact they themselves did not even claim to be prophets, just pious Jews defending their worship against idolatry.

But because these books were useful they were often included alongside the Taurat and Zabur to give a complete history of the Jewish people. After the Injil and the message of Isa al Masih (PBUH) was written the books of Taurat, Zabur and Injil were combined into one book – al kitab or Bible. Some Bibles today will even include these books of Apocrypha, though they are not part of Taurat, Zabur or Injil.

But the promises given in Taurat and Zabur were still waiting for fulfillment. Following the Greek influences the powerful Roman Empire expanded and replaced the Greeks to rule over the Jews (this is the yellow period that comes after the blue in the timeline above). The Romans ruled efficiently but harshly. Taxes were high and the Romans tolerated no dissent. The Jewish people longed ever more for the fulfillment of the promises given in Taurat and Zabur, though in their long wait their worship became very rigid and they developed many extra rules not from the prophets but from traditions. These extra ‘commands’ seemed like good ideas when they were first suggested but they quickly replaced the original commands of the Taurat and Zabur in the hearts and minds of the Jewish teachers.

And then finally when it looked like perhaps the promises were long forgotten by Allah, the mighty angel Gabriel (Jibril) came to announce the long awaited birth of the Preparer.  We know him today as the Prophet Yahya (or John the Baptist – PBUH) . But that is the beginning of the Injil, which we look at next.

1 thought on “Zabur Closes – with Promise of the Coming Preparer”