Day 2: Isa al Masih selected – where Al-Aqsa & Dome of the Rock are today

Why is the location of Al-Aqsa (Al-Masjid al-‘Aqṣā or Bayt al-Maqdis) and Dome of the Rock (Qubbat al-Sakhrah) in Jerusalem so special? Many holy events have occurred there but few know what happened to the prophet Isa al Masih PBUH at this holy location.

To better understand the challenge that the Prophet Isa al Masih PBUH faced in Jerusalem we  compare it with the challenge for the Prophet Mohamed PBUH in Mecca.  Surah Al-Fath (Surah 48 – The Victory) says about the Quraysh who guarded access to the Kaaba.

They are the ones who denied Revelation and hindered you from the Sacred Mosque and the sacrificial animals, detained from reaching their place of sacrifice. Had there not been believing men and believing women whom ye did not know that ye were trampling down and on whose account a crime would have accrued to you without (your) knowledge, (God would have allowed you to force your way, but He held back your hands) that He may admit to His Mercy whom He will. If they had been apart, We should certainly have punished the Unbelievers among them with a grievous Punishment. (Surah Al-Fath 48:25)

The Quraysh hindered the prophet PBUH and his followers from the Sacred Mosque and the place of sacrifice in Mecca.  At the sacred Temple and place of sacrifice in Jerusalem something similar was occurring in the time of Isa al Masih PBUH.  The religious leaders had created a system of buying and selling of sacrificial animals, requiring money exchange for the worshipers coming from far away. This hindered true worship at the Temple.  But the Temple had been built to make the LORD known among the nations – not hide Him from them.  Isa al Masih PBUH proceeded to fix the situation, which resulted in his facing the challenge of unbelievers recounted in Surah Taghabun (Surah 64 – The Mutual Disillusion).

The Prophet had just entered Jerusalem at the exact day prophesied hundreds of years before, revealing himself as the Masih and a light to the nations.  That date, in the Jewish calendar, was Sunday, Nisan 9, the 1st day of a Holy Week.  Because of regulations in the Taurat, the next day, 10th of Nisan, was a unique day in the Jewish calendar.  Long before, the Taurat recorded the Prophet Musa (PBUH) preparing the 10th plague against Pharaoh when he was directed by Allah:

The Lord said to Moses and Aaron in Egypt, “This month is to be for you the first month, the first month of your year.  Tell the whole community of Israel that on the tenth day of this month each man is to take a lamb for his family, one for each household. (Exodus 12:1-3)

In that time Nisan was the first month of the Jewish year.  So, every Nisan 10 since the prophet Musa, each Jewish family would select a lamb for the upcoming Passover festival – it could only be done that day.  In the time of the Prophet Isa al Masih  the Jews selected the Passover lambs in their Temple in Jerusalem – the same location where 2000 years before the Prophet Ibrahm (PBUH) had been tested in the sacrifice of his son.  Today, this is the location of Al-Aqsa Mosque and Dome of the Rock.  So at one specific location (where Al-Aqsa and Dome of the Rock are today and where the Jewish Temple was in the time of the prophet Isa al Masih), on one specific day of the Jewish year (Nisan 10), Jews would select the Passover lamb for each family (the poor would select doves).  As you might imagine, the vast number of people and animals, the noise of the bartering, the foreign exchange (since Jews came from many locations) would make the Temple on Nisan 10 like a frenzied market.  The Injil records what the Prophet Isa al Masih did that day.  When the passage refers to the ‘next day’ this is the day after his royal  entry into Jerusalem, the 10th of Nisan – the exact day that Passover lambs were selected in the Temple.

11Jesus entered Jerusalem and went into the temple courts. He looked around at everything, but since it was already late, he went out to Bethany with the Twelve.

12The next day (i.e. Nisan 10) … they were leaving Bethany… 15On reaching Jerusalem, Jesus entered the temple courts and began driving out those who were buying and selling there. He overturned the tables of the money changers and the benches of those selling doves, 16and would not allow anyone to carry merchandise through the temple courts.17 And as he taught them, he said, “Is it not written: ‘My house will be called a house of prayer for all nations’? But you have made it ‘a den of robbers.’” (Mark 11:11-17)

At the human level the prophet Isa al Masih went into the Temple on Monday (Day 2 of the holy week), Nisan 10, and stopped the commercial activity.  The buying and selling had created a barrier for prayer to heaven, especially for the other nations.  The prophet was a Light for these nations, so he broke the barrier between earth and heaven by stopping the commercial activity.  But something unseen also happened at the same time.  We can understand this from the title that the Prophet Yahya (PBUH) had given to Isa al Masih.  In announcing him the Prophet Yahya had said:

The next day John saw Jesus coming toward him and said, “Look, the Lamb of God, who takes away the sin of the world! (John 1:29)

The Prophet Isa al Masih was ‘the Lamb of God’.  In the sacrifice of Ibrahim, Allah was the one who had selected the lamb for Ibrahim in place of his son by catching it in a bush.  This is why Eid al-adha is celebrated today.  The Temple was at this location where that lamb had been selected – where al-Aqsa and the Dome of the Rock are today.  When the Prophet Isa al Masih went into the Temple on Nisan 10 he was selected by Allah as His Passover Lamb.   He had to be in the Temple on this exact day in order to be selected – and he was.

The Purpose of Isa as Passover Lamb

What was he selected for as Passover lamb?  Isa’s teaching provides the answer.  When he said, ‘My house will be called a house of prayer for all nations’ he was quoting from the Prophet Isaiah (PBUH).  Here is the full passage (what the prophet spoke is in red).

And foreigners who bind themselves to the Lord
to minister to him,…

and who hold fast to my covenant—
7 these I will bring to my holy mountain
and give them joy in my house of prayer.
Their burnt offerings and sacrifices
will be accepted on my altar;
for my house will be called
a house of prayer for all nations.”  (Isaiah 56:6-7) 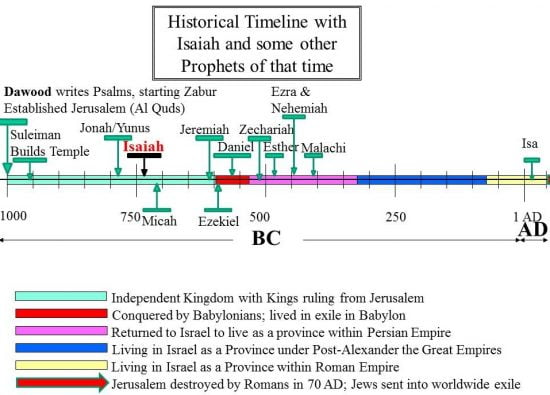 The ‘Holy Mountain’ that Isaiah had written about was Mount Moriah, where the Prophet Ibrahim had sacrificed the lamb selected by Allah in place of his son.  The ‘house of prayer’ was the Temple which Isa al Masih entered on Nisan 10.  For Jews, the location and date of the festival combined the sacrifice of Ibrahim and the Passover of Musa.  However, only Jews could sacrifice at the Temple and celebrate Passover.  But Isaiah had written that ‘foreigners’ (non-Jews) would one day see that ‘their burnt offerings and sacrifices would be accepted’.  In quoting the prophet Isaiah, Isa announced that his work would obtain an acceptance for non-Jews .  He did not explain at this point how he would do this.   But as we continue the account we will learn even as we recognize now that Allah had a plan to bless you and me

Next days in the Holy Week

After the Jews selected their lambs on Nisan 10, the regulations in the Taurat commanded them to:

Take care of them (the selected lambs) until the fourteenth day of the month, when all the members of the community of Israel must slaughter them at twilight. (Exodus 12:6)

After that first Passover at the time of the prophet Musa, the Jews sacrificed their Passover lambs every Nisan 14.  We add ‘taking care of the lambs’ and their sacrifice to the Taurat Regulations in the timeline for the week.  In the lower half of the timeline we add the activities of the prophet for Day 2 of the week – his cleansing of the Temple and his selection as Allah’s Passover lamb. 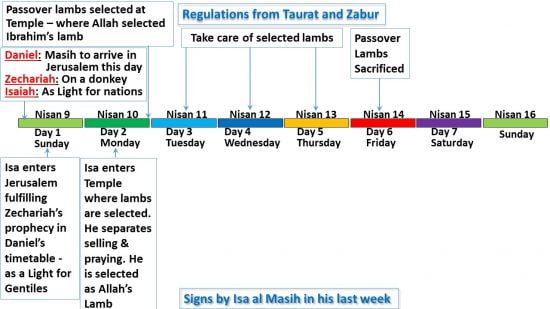 When the prophet Isa al Masih PBUH entered and cleansed the Temple, this also had an impact at the human level.  The Injil continues by stating:

The chief priests and the teachers of the law heard this and began looking for a way to kill him, for they feared him, because the whole crowd was amazed at his teaching. (Mark 11:18)

In cleansing the Temple he was targeted by the Jewish leaders to be killed.  They started by confronting the prophet.  The Injil recounts that the next day…

They arrived again in Jeruslaem, and while Jesus was walking in the Temple courts the chief priests, the teachers of the Law and the elders came to him.  “By what authority are you doing these things?”, they asked, “And who gave you authority to do this?” (Mark 11:27-28)

Surah at-Taghabun reminds us that this kind of challenge was given to the Prophets at that time.

Has not the story reached you, of those who rejected Faith aforetime? So they tasted the evil result of their conduct; and they had a grievous Penalty.

That was because there came to them apostles with Clear Signs, but they said: “Shall (mere) human beings direct us?” So they rejected (the Message) and turned away. But God can do without (them): and God is free of all needs, worthy of all praise.

The Unbelievers think that they will not be raised up (for Judgment). Say: “Yea, By my Lord, Ye shall surely be raised up: then shall ye be told (the truth) of all that ye did. And that is easy for God.” (Surah at-Taghabun:64 5-7)

Isa al Masih PBUH, would have to prove his authority with the hardest test, one that unbelievers regularly challenged the prophets with, as Surah at-Taghabun recounts. This would be the Clear Sign showing that the prophet was not simply acting from ‘mere human’ authority.  As at-Taghabun makes clear, the test was to be raised from the dead.  But first, a few more events had to unfold that fateful week.

We follow how the plots of the authorities, the actions of the prophet, and the regulations from Taurat combine together as we look at the events on Day 3&4 next.

Tags:al-aqsa locationdome of the Rock locationisa al masih the lamb of Godwhat is lamb of godwhy is the dome of the rock so important