We saw in The History of the Israelites that though they were given The Law their history through the Bible (al kitab) was largely one of disobeying and sinning against this Law. I mentioned in the Introduction to Zabur that the Kings which followed Dawud and Suleiman (PBUT), though physical offspring of these godly Kings, most of them were very evil. So Allah sent the many prophets of Zabur to warn them. 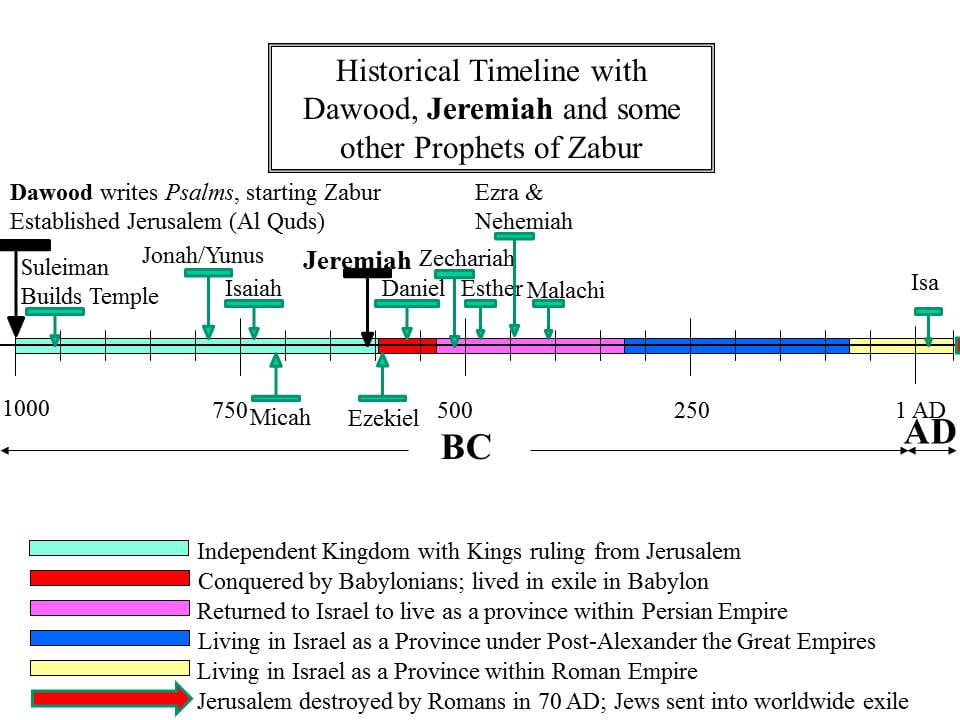 The prophet Jeremiah (PBUH -see him in the Timeline of Prophets) lived at the close of the period of Kings, when sin and evil was very great. The sins he lists are ones that are also very common today: adultery, drunkenness, sexual immorality, idolatry, witchcraft, corruption, fighting, violence, dishonesty, the rich exploiting the poor etc. But Jeremiah starts his Book by giving a summary of their sin and groups all their many sins into just two:

“My people have committed two sins: They have forsaken me, the spring of living water, and have dug their own cisterns, broken cisterns that cannot hold water.” (Jeremiah 2:13)

The prophet Jeremiah uses a metaphor to help us understand sin better. Allah (through the prophet) is saying that they were thirsty people. There is nothing wrong with being thirsty – but they needed to drink from good water. Allah himself was the good water which could satisfy their thirst. However, instead of coming to Him to satisfy their thirst, the Israelites, went to other cisterns (i.e. water containers) to satisfy their thirst, but these cisterns were broken and thus could not really hold any water. In other words, their sin, in all its many forms, could be summarized as turning to other things apart from Allah to satisfy their thirst – but these other things could not quench their thirst. In the end after pursuing their sin, the Israelites were still thirsty, but now without Allah, holding only their broken cisterns – i.e. all the problems and difficulties caused by their sins.

The Wisdom of Suleiman reveals our ‘broken cisterns’

In fact, this was also experienced and explained by Suleiman (PBUH). As I described in The Wisdom I learned in submission to Allah’s Mercy it was the writings of Suleiman that made a deep impact on me. He described his life as one where he had everything one could want, but in the end he was still ‘thirsty’. Here is how he describes his attempts at drinking from the ‘broken cisterns’ that are available all around.

I, was king over Israel in Jerusalem. I devoted myself to study and to explore by wisdom all that is done under heaven… I have seen all the things that are done under the sun; all of them are meaningless, a chasing after the wind.

I thought to myself, “Look, I have grown and increased in wisdom more than anyone who has ruled over Jerusalem before me; I have experienced much of wisdom and knowledge.” Then I applied myself to the understanding of wisdom, and also of madness and folly, but I learned that this, too, is a chasing after the wind.

I thought in my heart, “Come now, I will test you with pleasure to find out what is good.” But that also proved to be meaningless. “Laughter,” I said, “is foolish. And what does pleasure accomplish?” I tried cheering myself with wine, and embracing folly—my mind still guiding me with wisdom. I wanted to see what was worthwhile for men to do under heaven during the few days of their lives.

I undertook great projects: I built houses for myself and planted vineyards. I made gardens and parks and planted all kinds of fruit trees in them. I made reservoirs to water groves of flourishing trees. I bought male and female slaves and had other slaves who were born in my house. I also owned more herds and flocks than anyone in Jerusalem before me. I amassed silver and gold for myself, and the treasure of kings and provinces. I acquired men and women singers, and a harem as well—the delights of the heart of man. I became greater by far than anyone in Jerusalem before me. In all this my wisdom stayed with me.

I denied myself nothing my eyes desired; I refused my heart no pleasure. My heart took delight in all my work, and this was the reward for all my labor. Yet when I surveyed all that my hands had done and what I had toiled to achieve, everything was meaningless, a chasing after the wind; nothing was gained.

The wisdom of Suleiman and the warning of Jeremiah were written for us today. This is especially so because we live in an age with more wealth, entertainment, movies, music etc. than previous generations. Our modern society is by far the wealthiest, best educated, most traveled, entertained, happiness-driven, and technologically advanced out of any age. So we can easily turn to these things – and the other things that come in our age: pornography, illicit relationships, drugs, alcohol, greed, money, anger, jealousy – hoping that perhaps this will satisfy our thirst. We know from the Law of all the Prophets that these things are wrong, but we think that they will satisfy the thirst in our hearts so we ache for them. This was true in Suleiman’s day, in Jeremiah’s day, in the days of the other prophets, and also in our day.

The warning of Jeremiah and Suleiman are sent by Allah to cause us to ask some honest questions of ourselves.

Sin is not keeping the commandments, but it is also something else – something we should pay attention to. It is a Sign of our Thirst. Once we recognize this thirst for what it is we have gained some wisdom. Allah included this in Zabur because He is fully aware of our thirst – and He desires that we be aware of it as well. Because He will quench our thirst – He wants to. And He starts in His usual way – by giving a special prophetic promise – and again through Jeremiah. We look at this in our next post