In the Introduction to Zabur, I mentioned that the Prophet and King Dawood (PBUH) started the Zabur with the inspired writings of the book of Psalms, and that other books were then added by succeeding prophets. A very important prophet, considered to be one of the major prophets (because his book is so long) was Isaiah. He lived about 750 BC. The timeline below shows when Isaiah lived in comparison with the other prophets of Zabur. 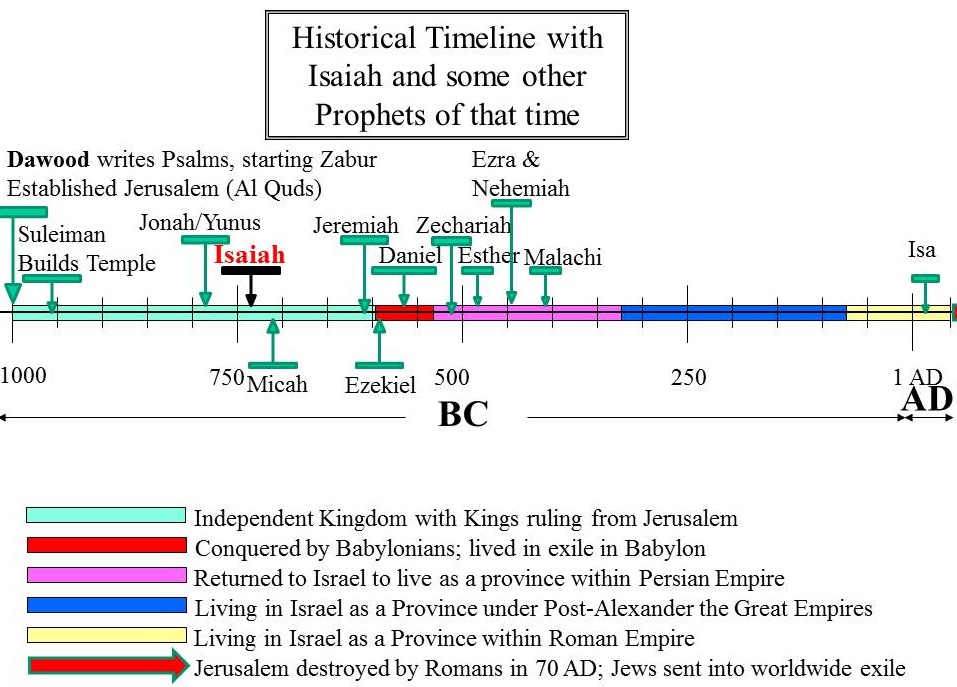 Though Isaiah lived so long ago (about 2800 years ago) he made many prophecies predicting future events, as prophet Musa (pbuh) had previously said a prophet should make.

His prophecy predicts such an astounding miracle that Surah at-Tahrim (Surah 66 – The Prohibition) ayah 12 recaps it.

And Mary the daughter of ‘Imran, who guarded her chastity; and We breathed into (her body) of Our spirit; and she testified to the truth of the words of her Lord and of His Revelations, and was one of the devout (servants). (Surah At-Tahrim 66:12)

What is surah at-Tahrim describing?  We turn back to Isaiah to explain the prophecy.

As explained in the Introduction to Zabur, the kings that followed Suleiman (pbuh) were mostly wicked, and this was true of the Kings in the time of Isaiah. So his book is full of warnings of coming judgment (which happened about 150 years later when Jerusalem was destroyed by Babylon – see here for history). However, he also prophesied far beyond that and looked deep into his future when Allah would send a special sign – never yet sent to humanity. Isaiah speaks to the King of Israel, who is a descendant of Dawood (pbuh), which is why this Sign is addressed to the ‘House of David’ (Dawood)

Then Isaiah said, “Hear now, you house of David! Is it not enough to try the patience of men? Will you try the patience of my God also? Therefore the Lord himself will give you a sign: The virgin will be with child and will give birth to a son, and will call him Immanuel. He will eat curds and honey when he knows enough to reject the wrong and choose the right. (Isaiah 7: 13-15)

This was certainly a bold prediction! Who had ever heard of a virgin woman having a son? It seemed such an incredible prediction that for many years people wondered if there had been some mistake. Certainly, a man simply making a guess about the future would not state – and write down for everyone in succeeding generations to read – such a seemingly impossible prediction. But there it was. And from the Dead Sea Scrolls that exist today we know that this prophecy was in fact written long ago – hundreds of years before Isa (pbuh) was born.

We today, living after Isa al Masih (pbuh), can see that it is a prophecy of his coming. No other prophet, including Ibrahim, Musa and Muhammad (pbut) was born of a virgin. Only Isa (pbuh), of all humans ever born, has come into the world in this way. So Allah, hundreds of years in advance of his birth, was giving us a Sign of his coming and was also preparing us to learn things about this coming son of a virgin. We note two things in particular.

Called ‘Immanuel’ by his mother

First, this coming son of a virgin would be called ‘Immanuel’ by his mother. This name literally means ‘God with us’. But what does that mean? It probably had several meanings, but since this prophecy was declared to the evil kings whom Allah was going to judge shortly, one important meaning was that when this son would be born it was a sign that God was no longer against them in judgment but was ‘with them’. When Isa (pbuh) was born, it seemed in fact like the Israelites had been forsaken by Allah since their enemies ruled them. The birth of the son of the virgin was a sign that God was with them, not against them. The Injil in the Gospel of Luke records that his mother Maryam (or Mary) sang a sacred song when the angel gave her the message of her coming son. This song contained the following:

“My soul glorifies the Lord and my spirit rejoices in God my Savior… His mercy extends to those who fear him, from generation to generation… He has helped his servant Israel, remembering to be merciful to Abraham and his descendants forever, even as he said to our fathers.” (Luke 1:46-55)

You can see that Maryam, when she was informed that she would have a son though she was a virgin, understood this to mean that the Lord was remembering his Mercy to Abraham (Ibrahim) and his descendants forever. The judgments did not mean Allah was never going to be with the Israelites again.

This is why we all lock the doors of our houses and apartments; why every country needs policemen; why we have banking encryption and passwords; and why we continually need to keep making new laws in all countries – because we need to protect ourselves against each other since we do not ‘reject the wrong and choose the right’.

And this is true even of the Prophets. The Taurat records that on two occasions the prophet Ibrahim (pbuh) lied about his wife saying that she was only his sister (in Genesis 12:10-13 & Genesis 20:1-2). It also records that the prophet Musa (pbuh) murdered an Egyptian (Exodus 2:12) and on one occasion did not exactly follow Allah’s command (Numbers 20:6-12). The prophet Muhammad (pbuh) is commanded to ask forgiveness in Surah Muhammad (Surah 47 – Muhammad) – showing that he too did not always reject the wrong and choose the right.

So know, [O Muhammad], that there is no deity except Allah and ask forgiveness for your sin and for the believing men and believing women. And Allah knows of your movement and your resting place. (Surah Muhammad 47:19)

The following hadith from Muslim shows how earnestly he prayed for forgiveness.

Abu Musa Ash’ari reported on the authority of his father that Allah’s Apostle (may peace be upon him) used to supplicate in these words: “O Allah, forgive me my faults, my ignorance, my immoderation in my concerns. And Thou art better aware (of my affairs) than myself. O Allah, grant me forgiveness (of the faults which I committed) seriously or otherwise (and which I committed inadvertently and deliberately. All these (failings) are in me. O Allah, grant me forgiveness from the fault which I did in haste or deferred, which I committed in privacy or in public and Thou art better aware of (them) than myself. Thou art the First and the Last and over all things Thou art Omnipotent.” (Muslim 35: 6563)

This is very similar to the prayer of prophet Dawood (pbuh) when he prayed for forgiveness for his sins:

So we see that these men – though they are prophets – struggle with sin and need to ask for forgiveness. This seems to be the universal human condition of all the descendants of Adam.

The Holy son of the virgin

But this son prophesied by Isaiah rejects the wrong and chooses the right naturally and right from his early age. It is instinct for him. For that to be possible he must have a different lineage. All the other prophets, through their fathers, trace back to Adam, and he did not ‘reject the wrong and chose the right’ as we saw.  As genetics passes the nature of the father to his descendants, so this rebellious nature of Adam passed to all of us and even to the prophets. But the son born of a virgin, by definition, would not have Adam in his lineage as a father. The parental line of this son would be different, and so he would be holy. This is why the Qur’an, when recounting the angelic message to Maryam about her virgin-born son, called the son ‘holy’

The Prophet Isaiah (pbuh) was clear, and the later Books agree – there was a son coming who would be born of a virgin, thus having no earthly father and would not have this nature of sin, and would thus be Holy.

Flashback to Adam in Paradise

But it is not only the later books that speak of this coming son of the virgin. It was also there from the beginning. We saw in the Sign of Adam that Allah had Spoken a Promise to Satan. I repeat it here. 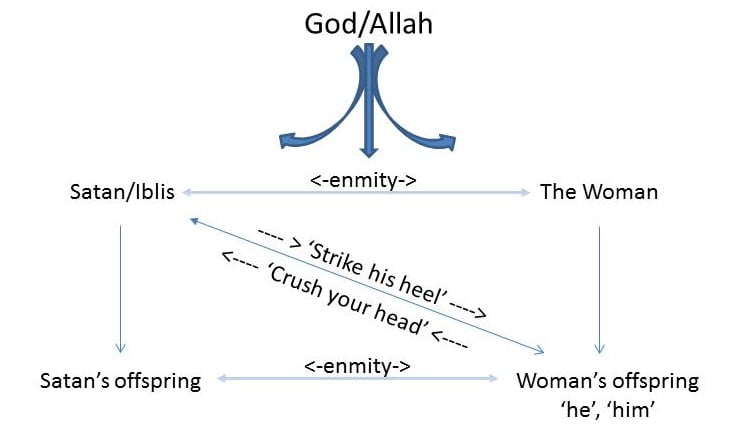 Please note that Allah never promised the man an offspring like he promises the woman. This is quite extraordinary especially given the emphasis of sons coming through fathers through the Taurat, Zabur & Injil (al kitab/ Bible). In fact, one criticism of these Books by modern Westerners is that they ignore the blood lines that go through women. It is ‘sexist’ in their eyes because it just considers sons of men. But in this case it is different – there is no promise of an offspring (a ‘he’) coming from a man. It says only that there will be an offspring coming from the woman, without mentioning a man.

Now from the perspective of Isaiah’s clear prophecy of a son from a virgin it is clear that what was meant even long ago in the Garden was that an offspring (son) would come from a woman only (thus a virgin). I urge you to go back and read this discussion in the Sign of Adam from this perspective and you will see that it ‘fits’. All the sons of Adam from the beginning of history suffer the same problem of not ‘rejecting the wrong and choosing the right’ as our ancestor Adam did. So Allah, right then when sin came into the world, made a promise that someone holy and not from Adam would come and ‘crush’ Satan’s head.

But how was this holy son going to do this? If it was about giving a message from Allah, the other prophets like Ibrahim and Musa (pbut) had already faithfully given messages. No, the role of this holy son was different, but to understand this we need to explore further in the Zabur.