The last Surah in the Quran, Surah An-Nas (114 – The Mankind) states that

Allah is the Sovereign or King of Mankind.  If He is a King then there must be a Kingdom.  What is the Kingdom of God like? Surah al-Kawthar (Surah 108 – The Abundance) gives an answer.

To thee have We granted the Fount (of Abundance). (Surah al-Kawthar 108:1)

Since The King grants Abundance, His Kingdom must have in abundance.  But what kind of abundance?  It was revealed to the prophets of Zabur.

The prophet Isaiah (pbuh) had prophesied the coming Son of the Virgin which was fulfilled in the birth of Isa al Masih (pbuh) hundreds of years later. However, other prophecies in Zabur also predicted a coming time of peace and blessing.

In the History of the Israelites, the prophet and King Dawud (pbuh) was the first of a line of kings established by Allah to rule from Jerusalem. However, after Kings Dawud and Suleiman (pbut) most of the Kings were wicked. So living in their kingdom then was like living under the rule of the many dictators today; there was war and fighting between people and between nations – just like today; there was corruption and exploitation of the rich over the poor – just like today; there was death and misery all around – just like today. But the prophets of Zabur said that one day – in the future – a new rule would be established. This would be a Kingdom with justice, mercy, love, and peace.  The prophet Isaiah (pbuh) predicted how life would be in this rule.

He (Allah) will judge between the nations and will settle disputes for many peoples. They will beat their swords into plowshares and their spears into pruning hooks. Nation will not take up sword against nation nor will they train for war anymore (Isaiah 2:4)

No more war! This certainly is not true of our world today. But even more than peace between people, the prophecies even predict a change in natural ecology.

The wolf will live with the lamb, the leopard will lie down with the goat, the calf and the lion and the yearling together and a little child will lead them. The cow will feed with the bear, their young will lie down together, and the lion will eat straw like the ox. The infant will play near the hole of the cobra, and the young child will put his hand into the viper’s nest. They will neither harm nor destroy on all My holy mountain for the earth will be full of the knowledge of the LORD. (Isaiah 11:6-9)

This certainly has never taken place (yet). But the prophecies extend even further to lifespans and personal security.

“Never again will there be in it an infant who lives but a few days, or an old man who does not live out his years; he who dies at a hundred will be thought a mere youth; he who fails to reach a hundred will be considered accursed. They will build houses and dwell in them; they will plant vineyards and eat their fruit. No longer will they build houses and others live in them, or plant and others eat … my chosen ones will long enjoy the works of their hands. They will not toil in vain or bear children doomed to misfortune; for they will be a people blessed by the LORD, they and their descendants with them. Before they call I will answer; while they are still speaking I will hear. The wolf and the lamb will feed together, and the lion will eat straw like the ox…” says the LORD. (Isaiah 65:20-25)

Security, peace, immediate answer of prayers… None of these prophecies have happened – yet. But they have been Spoken and Written down. Many think that there is perhaps some mistake in these hopeful prophecies – but the literal fulfillment of the Sign of the Virgin’s Son should make us take these prophecies seriously – and watch for their fulfillment.

The Kingdom of God

If we reflect we can understand why they have not occurred yet. These prophecies were declared in the context of the Kingdom of God – the rule of God in lives and affairs of people. Read another prophecy on the coming Kingdom of God

All you have made will praise you O LORD; your saints will extol you. They will tell of the glory of your Kingdom and speak of your might. So that all men may know of your mighty acts and the glorious splendor of your kingdom. Your Kingdom is an everlasting Kingdom, and your dominion endures through all generations. The LORD is faithful to all his promises and loving towards all He has made. (Psalms 145:10-14)

This was a message given by the King and prophet Dawud (pbuh) around 1000 BC (see link here when Dawud & prophets of Zabur lived). This prophecy foresees a Day when, the Kingdom of God will rule. This Kingdom will have glory and splendor, and it will not be temporary like human kingdoms – it will be everlasting. This has not been brought about yet and that is why we have not yet seen these other prophecies of peace come about – because this peace comes with the Kingdom of God.

Another prophet in the Zabur, Daniel (pbuh) who lived about 550 BC in Babylon as part of the Israelite exile there, explained further how this Kingdom would be established. 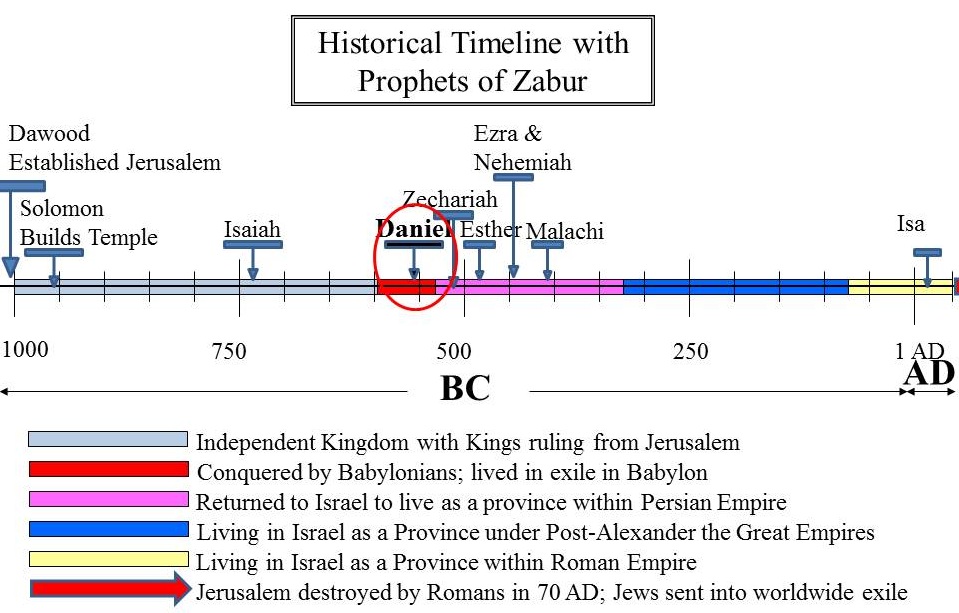 When Prophet Daniel (pbuh) lived compared to other prophets of Zabur

Daniel (pbuh) interpreted dreams sent by Allah to the Babylonian king to prophesy the future unfolding of kingdoms through history. Here is how Daniel interpreted a dream of this king of Babylon.

… The God of heaven has given you (i.e. king of Babylon in 550 BC) dominion and power and might and glory; in your hands he has placed mankind and the beasts of the field and the birds of the air. …After you, another kingdom will rise, inferior to yours. Next, a third kingdom, one of bronze, will rule over the whole earth. Finally, there will be a fourth kingdom, strong as iron—for iron breaks and smashes everything—…so it will crush and break all the others. … In the time of those kings, the God of heaven will set up a kingdom that will never be destroyed, nor will it be left to another people. It will crush all those kingdoms and bring them to an end, but it will itself endure forever. This is the meaning of the vision of the rock cut out of a mountain, but not by human hands…. Daniel 2: 36-45

This kingdom starts out small (‘a rock cut out of a mountain’) but will eventually rule forever, like the prophecy from Dawud (pbuh) above. So why is Allah establishing His Kingdom so slowly? Why is it taking so long? Why has it not come about yet? When you think about it, all kingdoms have the following components:

So for example, in Canada, where I live, as a Kingdom. Canada has a ruler – which today is Justin Trudeau our elected Prime Minister. Canada has citizens – of which I am one. Canada also has a constitution or law which determines the rights and responsibilities of all its citizens. Canada also has a nature, in this case it is located in a certain part of the earth which gives it a certain physical size, climate, natural resources etc. All countries and Kingdoms, past and present, have these four components.

You and I are invited to the Kingdom of God

This is also true of the Kingdom of God. We have already seen from the prophecies above that this Kingdom will have a special Nature (glorious and everlasting) and a Constitution (of peace, fairness, harmony in nature etc.). It is the other two components that make the Kingdom of God possible: its King and its citizens. We look at the King in the next article. In the meantime you may want to ask yourself if you would want to be a citizen in this Kingdom of God. Here is how the prophet Isaiah (pbuh), through his message, invites all people who would want to be citizens in This Kingdom.

“Come, all you who are thirsty, come to the waters; and you who have no money, come, buy and eat! … without money and without cost. Why spend money on what is not bread, and your labor on what does not satisfy? Listen, listen to me, and eat what is good, and your soul will delight in the richest of fare. Give ear and come to me; hear me, that your soul may live. I will make an everlasting covenant with you, my faithful love promised to David… Seek the LORD while he may be found; call on him while he is near. (Isaiah 55:1-6)

Allah is inviting all those who are ‘thirsty’ for this Kingdom to come to it, and the love given to the ancient king Dawud (pbuh) will also be extended to all those who come for it. If you have an invitation to come to something that means you do not yet have it.  But the fact that Allah invites us, means that He wants us to become citizens in His Kingdom and live in this rule of peace. So at this point we have many questions of ‘how’ and ‘when’ regarding the coming of this Kingdom which we will continue to look at in further articles about the Zabur.  But there is one question that only you can answer: ‘Do I want to be in this Kingdom?’

3 thoughts on “The Coming Kingdom”