The Palm Sunday Entry of Isa al Masih into Jerusalem began his final week.  Surah Al-Anbya (Surah 21 – The Prophets) tells us that:

And (remember) her who guarded her chastity: We breathed into her of Our spirit, and We made her and her son a sign for all peoples. (Surah Al-Anbya 21:91)

We begin going through each day of the final week of Isa al Masih, noticing how all his teaching and actions are signs pointing to Creation.  This would show that the events each day of this week were foreordained by Allah from the beginning of time – not by any human idea since man cannot coordinate events separated by thousands of years.  We start on Sunday – Day One.

Day One – Light in Darkness

God is the Light of the heavens and the earth. The Parable of His Light is as if there were a Niche and within it a Lamp: the Lamp enclosed in Glass: the glass as it were a brilliant star:  Lit from a blessed Tree, an Olive, neither of the east nor of the west, whose oil is well-nigh luminous, though fire scarce touched it: Light upon Light! God doth guide whom He will to His Light: God doth set forth Parables for men: and God doth know all things. (Surah An-Nur 24:35)

This parable refers back to the First Day of Creation when Allah created Light.  The Taurat states:

The Light shines on the Gentiles

The Prophet Isa al Masih PBUH had just entered Jerusalem mounted on a donkey as the prophet Zechariah PBUH had prophesied 500 years earlier, doing so on the exact day that the prophet Daniel PBUH had prophesied 550 years earlier.  The Jews had been arriving from many countries for the upcoming Passover festival so Jerusalem was crowded with Jewish pilgrims (like Mecca at the time of Hajj). Therefore the arrival of the prophet had caused a stir among the Jews.  But it was not only the Jews who noticed the arrival of Isa al Masih.  The Injil records what happened right after he entered Jerusalem.

20 Now there were some Greeks among those who went up to worship at the festival. 21 They came to Philip, who was from Bethsaida in Galilee, with a request. “Sir,” they said, “we would like to see Jesus.” 22 Philip went to tell Andrew; Andrew and Philip in turn told Jesus. (John 12:20-22)

It was extremely unusual for Greeks, (that is the Gentiles or non-Jews), to be at a Jewish festival.  The Greeks and Romans of that time, since they were polytheists, were considered unclean and shunned by the Jews.  And most Greeks considered the Jewish religion with only one (unseen) God and its festivals to be foolish.  At that time, only Jews were monotheists.  So these peoples regularly stayed apart from each other.  Since the Gentile, or non-Jewish, society was many times larger than the Jewish society, the Jews lived in a sort of isolation from much of the world.  Their different religion, their halal diet, their exclusive book of the prophets created a barrier between the Jews and the Gentiles, with each side hostile to the other side.

In our day, with polytheism and idolatry rejected by much of the world, we can easily forget how different this was in the time of this Prophet.  In fact, in the day of Ibrahim PBUH, almost everyone apart from that prophet were polytheists.  In the time of the Prophet Musa PBUH, all the other nations worshiped idols, with the Pharaoh himself claiming to be one of the gods.  The Israelites were a little island of monotheism in the ocean of idol worship of all the surrounding nations.  But the prophet Isaiah PBUH (750 BCE) had been permitted to see into the future and he foresaw a change for all these nations.  He had written:

Listen to me, you islands;
hear this, you distant nations:
Before I was born the Lord called me;
from my mother’s womb he has spoken my name….
5 And now the Lord says—
he who formed me in the womb to be his servant
to bring Jacob back to him
and gather Israel to himself,
for I am honored in the eyes of the Lord
and my God has been my strength—
6 he says:
“It is too small a thing for you to be my servant
to restore the tribes of Jacob
and bring back those of Israel I have kept.
I will also make you a light for the Gentiles, that my salvation may reach to the ends of the earth.” (Isaiah 49:1, 5-6)

4 “Listen to me, my people;
hear me, my nation:
Instruction will go out from me;
my justice will become a light to the nations. (Isaiah 51: 4)

So the prophet Isaiah had foretold that the coming ‘servant’ of the Lord, though Jewish (‘the tribes of Jacob’) would be a ‘light for the Gentiles’ (all the non-Jews) and this light would reach to the ends of the earth.  But how could this happen with this barrier between the Jews and the Gentiles lasting hundreds of years?

That day when the prophet Isa entered Jerusalem the light began to draw the first Gentiles as we see some approaching the prophet.  Here at this Jewish festival were Greeks who had journeyed to Jerusalem to learn about the prophet Isa al Masih PBUH.  But would they, considered haram by the Jews, be able to see the prophet?  They asked Isa’s companions, who brought the request to the prophet.  What would he say?  Would he permit these Greeks, who knew so little about proper religion, to meet him?  The Injil continues

23 Jesus replied, “The hour has come for the Son of Man to be glorified. 24 Very truly I tell you, unless a kernel of wheat falls to the ground and dies, it remains only a single seed. But if it dies, it produces many seeds. 25 Anyone who loves their life will lose it, while anyone who hates their life in this world will keep it for eternal life. 26 Whoever serves me must follow me; and where I am, my servant also will be. My Father will honor the one who serves me.

27 “Now my soul is troubled, and what shall I say? ‘Father, save me from this hour’? No, it was for this very reason I came to this hour. 28 Father, glorify your name!”

Then a voice came from heaven, “I have glorified it, and will glorify it again.” 29 The crowd that was there and heard it said it had thundered; others said an angel had spoken to him.

30 Jesus said, “This voice was for your benefit, not mine. 31 Now is the time for judgment on this world; now the prince of this world will be driven out.32 And I, when I am lifted up from the earth, will draw all people to myself.” 33 He said this to show the kind of death he was going to die.

34 The crowd spoke up, “We have heard from the Law that the Messiah will remain forever, so how can you say, ‘The Son of Man must be lifted up’? Who is this ‘Son of Man’?”

Belief and Unbelief Among the Jews

37 Even after Jesus had performed so many signs in their presence, they still would not believe in him.38 This was to fulfill the word of Isaiah the prophet:

“Lord, who has believed our message
and to whom has the arm of the Lord been revealed?”

39 For this reason they could not believe, because, as Isaiah says elsewhere:

41 Isaiah said this because he saw Jesus’ glory and spoke about him.

42 Yet at the same time many even among the leaders believed in him. But because of the Pharisees they would not openly acknowledge their faith for fear they would be put out of the synagogue; 43 for they loved human praise more than praise from God.

47 “If anyone hears my words but does not keep them, I do not judge that person. For I did not come to judge the world, but to save the world.48 There is a judge for the one who rejects me and does not accept my words; the very words I have spoken will condemn them at the last day. 49 For I did not speak on my own, but the Father who sent me commanded me to say all that I have spoken.50 I know that his command leads to eternal life. So whatever I say is just what the Father has told me to say.” (John 12: 23-50)

In this dramatic exchange, including even a voice from heaven, the Prophet said that he would be ‘lifted up’ and this would draw ‘all people’ – not just the Jews – to himself.  Many Jews, even though they worshiped only one God, did not understand what the prophet was saying.  The prophet Isaiah had said it was due to their hard hearts – their unwillingness to submit to Allah – that was at the root, even as others believed silently because of fear.

The prophet Isa al Masih boldly claimed  that he had ‘come into the world as a light’ (v.46) which the previous prophets had written would shine on all nations.  On the day when he entered Jerusalem, the light first began to shine on the Gentiles.  Would this light spread to all nations?  What did the prophet mean by being ‘lifted up’?  We continue through this last week to understand these questions.

The following chart goes through each day of this week.  On Sunday, the first day of the week he fulfilled three different prophecies given by three previous prophets. First he entered Jerusalem mounted on a donkey as prophesied by Zechariah.  Second, he did so in the time prophesied by Daniel.  Third, his message and miracles started to light an interest among the Gentiles – which the prophet Isaiah had foretold would shine as a light to the nations and grow brighter to peoples around the world. 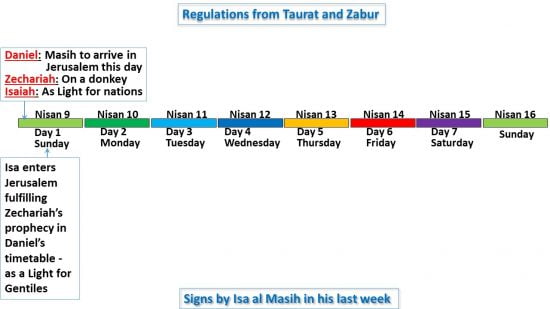