The prophet Isa al Masih PBUH had prophesied the signs of his return to earth on Day 4 of his final week.  The Injil then narrated how the religious leaders wanted to arrest him.  Shaytan (or Iblis) used this as a way to strike at the prophet – his avowed enemy.  Here is how it is recorded.

Now the Festival of Unleavened Bread, called the Passover, was approaching, and the chief priests and the teachers of the law were looking for some way to get rid of Jesus, for they were afraid of the people.   Then Satan entered Judas, called Iscariot, one of the Twelve.  And Judas went to the chief priests and the officers of the temple guard and discussed with them how he might betray Jesus. They were delighted and agreed to give him money.  He consented, and watched for an opportunity to hand Jesus over to them when no crowd was present. (Luke 22: 1-6)

We see that Satan/Shaytan took advantage of this conflict to ‘enter’ Judas to betray the prophet.  This should not surprise us.  Surah Fatir (Surah 35 – Originator) and Surah Ya-Sin (Surah 36 – Yasin) say of Shaytan that:

Verily Satan is an enemy to you: so treat him as an enemy. He only invites his adherents, that they may become Companions of the Blazing Fire. (Surah Fatir 35:6)

“Did I not enjoin on you, O ye Children of Adam, that ye should not worship Satan; for that he was to you an enemy avowed?  And that ye should worship Me, (for that) this was the Straight Way?  But he did lead astray a great multitude of you. Did ye not, then, understand?” (Surah Ya-Sin 36: 60-62)

Towards the end of the Injil, Satan is described in a vision:

From then on Judas watched for an opportunity to hand him over. (Matthew 26: 16)

The next day – Day 6 – was the Festival of Passover that the Prophet Musa PBUH had begun 1500 years beforehand.  How would Satan, through Judas, find his opportunity on this Holy day?  We look at this next.

The timeline shows how on the 5th day of this week, the great dragon, Satan, moved to strike at his greatest enemy – the Prophet Isa al Masih PBUH. 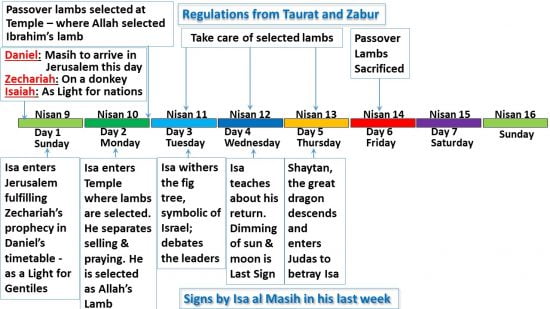 1 thought on “Day 5 – Shaytan descends to strike the Masih”