The Prophet Isa al Masih had been betrayed and crucified on the Jewish holy day of Passover, now known as Good Friday.  Passover began Thursday evening at sundown and ended on Friday sundown – day 6 of the week.  The last event of that day was the burial of the dead prophet.  The Injil records how the women who followed the prophet witnessed this.

The women who had come with Jesus from Galilee followed Joseph and saw the tomb and how his body was laid in it. 56 Then they went home and prepared spices and perfumes. But they rested on the Sabbath in obedience to the commandment. (Luke 23: 55-56)

The women wanted prepare the body of the prophet but time had run out and the Sabbath began at sundown Friday evening.  This was the 7th day of the week and Jews were not permitted to work on this day.  This command went back to the creation account in the Taurat.  Allah had created everything in 6 days.  The Taurat stated:

Thus the heavens and the earth were completed in all their vast array.

So the women, though they wanted to prepare his body, were obedient to the Taurat and rested.

But the chief priests continued their work on the sabbath.  The Injil records their meetings with the governor.

The next day, the one after Preparation Day, the chief priests and the Pharisees went to Pilate. 63 “Sir,” they said, “we remember that while he was still alive that deceiver said, ‘After three days I will rise again.’ 64 So give the order for the tomb to be made secure until the third day. Otherwise, his disciples may come and steal the body and tell the people that he has been raised from the dead. This last deception will be worse than the first.”

So that Sabbath day saw the chief priests working to secure a guard around the body in the tomb.  The body of the Prophet Isa al Masih PBUH rested in death while the women rested in obedience on that Sabbath day of the Holy week.  The Timeline shows how their rest that day mirrored the 7th day of Creation where the Taurat says that Allah rested from Creation. 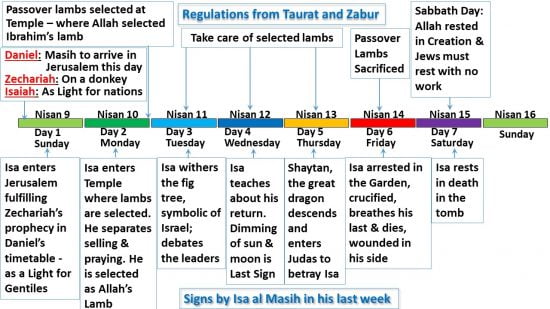 The Sabbath rest of Death for the Prophet Isa al Masih

But this was just the quiet rest before the display of power.  Surah al-Fajr (Surah 89 – The Dawn) reminds us how important the Dawn after a dark night can be.  The break of Day can reveal strange things for ‘those who understand’.

By the break of Day

By the Nights twice five;

By the even and odd (contrasted);

And by the Night when it passeth away;-

Is there (not) in these an adjuration (or evidence) for those who understand? (Surah al-Fajr 89:1-5)

We see what the day break of the next Day reveals.