If you were to name great love stories you might suggest that between the prophet Mohamed (PBUH) and Khadija, or between the prophet (PBUH) and his favorite wife Aisha, or that of Ali and Fatima. In movies and literature you might think of: Romeo & Juliet, Beauty & the Beast, Ali and Jasmine in the Aladdin movie, or perhaps Cinderella & Prince Charming.  In them, history, pop culture and romantic fiction come together in offering passionate love stories that captivate our hearts, emotions and imaginations.

Amazingly, the love that grew between Ruth & Boaz has proved far more enduring and noble than any of these love affairs, and in fact, still affects the lives of all the billions of us living today – more than three thousand years after these lovers met.

The story of Ruth and Boaz illustrate timeless principles from these Surahs.  Boaz, with his small kindnesses to Ruth, was a man who is a perfect opposite of the evil man warned against in Surah al-Ma’un (Surah 107 – The Small Kindnesses)

Then such is the (man) who repulses the orphan (with harshness),And encourages not the feeding of the indigent. (Surah al-Ma’un 107:2-3)

And He found thee wandering, and He gave thee guidance.

And He found thee in need, and made thee independent.

Therefore, treat not the orphan with harshness,

Nor repulse the petitioner (unheard);

The experiences of Naomi, the mother-in-law in the story of Ruth is a clear depiction of the principles given in Surah Ash-Sharh (Surah 94 – The Relief)

Have We not expanded thee thy breast?-

And removed from thee thy burden

The which did gall thy back?-

And raised high the esteem (in which) thou (art held)?

So, verily, with every difficulty, there is relief:

Verily, with every difficulty there is relief. (Surah Ash-Sharh 94:1-6)

O ye who believe! When there come to you believing women refugees, examine (and test) them:  God knows best as to their Faith: if ye ascertain that they are Believers, then send them not back to the Unbelievers. They are not lawful (wives) for the Unbelievers, nor are the (Unbelievers) lawful (husbands) for them. But pay the Unbelievers what they have spent (on their dower), and there will be no blame on you if ye marry them on payment of their dower to them. But hold not to the guardianship of unbelieving women: ask for what ye have spent on their dowers, and let the (Unbelievers) ask for what they have spent (on the dowers of women who come over to you). Such is the command of God: He judges (with justice) between you. And God is Full of Knowledge and Wisdom. (Surah Al-Mumtahanah 60:10)

Their romance is also a picture of a mystical and spiritual love offered to you and me by God.  The story of Ruth and Boaz deals with cross-cultural & forbidden love, immigration and the relationship between a powerful man and a vulnerable woman – applicable in today’s #MeToo era.  It deals with ancient Jewish-Arab relationships. It becomes a blueprint for us on how to establish a healthy marriage.  By any of these measures the love story of Ruth & Boaz is worth knowing.

Their love is recorded in the Book of Ruth in the Bible/Kitab.  It is a short book – only 2400 words long – and is well worth reading (here).  It is set about 1150 BCE, making this the oldest of all recorded love stories.  It has been made into several films.

The Love Story of Ruth

Naomi and her husband, both Jews, with their two sons leave Israel to escape drought and settle in the nearby country of Moab (today’s Jordan).  After marrying local women the two sons die, as does Naomi’s husband, leaving her alone with her two daughters-in-law.  Naomi decides to return to her native Israel and one of her daughters-in-law, Ruth, chooses to accompany her.  After a long absence, Naomi is back in her native Bethlehem as a destitute widow accompanied by Ruth, a young and vulnerable Moabite (Arab) immigrant.

With no income, Ruth goes out to gather grain left behind by the local harvest crews in the fields.  The Shariah Law of the Prophet Musa (PBUH) as a social safety net, had ordained harvesters to leave some grains behind in their fields so the impoverished could gather food.  Randomly it would seem, Ruth finds herself picking grains in the fields of a wealthy landowner named Boaz.  Boaz notices Ruth among the others working hard to gather up the grains left behind by his work crews.  He instructs his foremen to leave extra grain behind in the field so that she could gather more.  In doing so, Boaz gives the opposite illustration of the evil man in Surah al-Ma’un and Ruth has her needs met as Surah ad-Duhaa lays out. 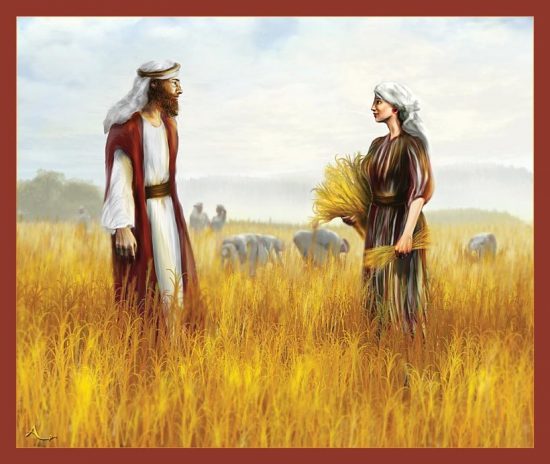 Ruth & Boaz meet. Much art has been done depicting their meeting

Because she can gather plentifully in his fields, Ruth comes back to Boaz’s fields every day to gather left-over grain.  Boaz, ever the protector, ensures that Ruth is not harassed or molested by any of his crews.  Ruth and Boaz are interested in each other, but because of differences in age, social status, and nationality, neither makes a move.  Here Naomi steps in as match-maker.  She instructs Ruth to boldly lay down by Boaz’s side at night after he has celebrated the harvest gathering.  Boaz understands this as a marriage proposal and decides to marry her.

But the situation is more complicated than simply love between them.  Naomi is a relative of Boaz, and since Ruth is her daughter-in-law, Boaz and Ruth are kin/related by marriage.  Boaz must marry her as a ‘kinsmen redeemer’.  This meant that under the Law of Musa (PBUH) he would marry her ‘in the name’ of her first husband (Naomi’s son) and so provide for her.   This would mean that Boaz purchase Naomi’s family fields.  Though that would prove costly to Boaz it was not the biggest obstacle.  There was another closer relative that had first rights to buy Naomi’s family’s fields (and also thus marry Ruth).  So the marriage of Ruth to Boaz hung on whether another man wanted the responsibility to care for Naomi and Ruth.  At a public meeting of the city elders this first-in-line declined the marriage since it put his own estate at risk.  Boaz was thus free to purchase and redeem Naomi’s family estate and marry Ruth.  Naomi, after many difficult years now finds relief, illustrating this principle in Surah Ash-Sharh

In their union they had a child, Obed, who in turn became the grandfather of King Dawud/David.  David was promised that ‘the Masih’ would come from his family.   Further prophecies predicted a virgin birth and finally the prophet Isa al Masih (PBUH) was born in Bethlehem, the same town that Ruth and Boaz had met in long before.  Their romance, marriage and family line resulted in offspring that today is the basis for the modern calendar, and global holidays like Christmas & Easter – not bad for a romance in a dusty village over 3000 years ago.

The chivalry and respect with which the rich and powerful Boaz treated Ruth, the destitute foreign woman, is a model contrasting the harassments and exploitations now common in our #MeToo day.  The historical impact of the family line which this romance and marriage produced, reminding us every time we note the date on our devices, gives this love story an enduring legacy.  But the Ruth & Boaz love story is also a picture of an even greater love – one you and I are invited into.

The Kitab/Bible describes us in a manner evoking Ruth when it says:

The Old Testament prophet Hosea (ca 750 BC) used the reconciliation in his own broken marriage to picture Allah/God reaching out to us with His love.  Like Ruth who entered the land as one unloved, but then was shown love by Boaz, He desires to show His love even to those of us who feel far from His love.  This is quoted in the Injil/New Testament (Romans 9:25) to show how Allah reaches wide to love those far from Him.

How is His love shown?  Isa al Masih, that descendant offspring from Boaz & Ruth, as a man is our ‘kinsman’, just as Boaz was to Ruth.  He paid our debt of sin to Allah when he was crucified on the cross, and thus he

gave himself for us to redeem us from all wickedness and to purify for himself a people that are his very own, eager to do what is good. (Titus 2:14)

A Model for our marriages

The way Isa al Masih (and Boaz) paid to redeem and then win his bride models how we can build our marriages.  The Kitab/Bible explains how we establish our marriages:

21 Submit to one another out of reverence for Christ.

22 Wives, submit yourselves to your own husbands as you do to the Lord. 23 For the husband is the head of the wife as Christ is the head of the church, his body, of which he is the Savior. 24 Now as the church submits to Christ, so also wives should submit to their husbands in everything.

25 Husbands, love your wives, just as Christ loved the church and gave himself up for her 26 to make her holy, cleansing[b] her by the washing with water through the word, 27 and to present her to himself as a radiant church, without stain or wrinkle or any other blemish, but holy and blameless. 28 In this same way, husbands ought to love their wives as their own bodies. He who loves his wife loves himself. 29 After all, no one ever hated their own body, but they feed and care for their body, just as Christ does the church— 30 for we are members of his body. 31 “For this reason a man will leave his father and mother and be united to his wife, and the two will become one flesh.” 32 This is a profound mystery—but I am talking about Christ and the church. 33 However, each one of you also must love his wife as he loves himself, and the wife must respect her husband. (Ephesians 5:21-33)

As Boaz and Ruth established their marriage on love and respect, and Isa’s care is a model for husbands to love their wives sacrificially, so we do well to build our marriages on these same values.

A Wedding Invitation for you and me

Let us rejoice and be glad
and give him glory!
For the wedding of the Lamb has come,
and his bride has made herself ready.  (Revelation 19:7)

Those who receive Jesus’ offer of redemption become his ‘bride’.  This heavenly wedding is offered to all of us.  The Bible ends with this invitation for you and me to come to His wedding

The relationship between Ruth & Boaz is a model of love that is still making itself felt today.  It is a picture of the heavenly love of Allah.  He will marry as His Bride all who accept His marriage proposal.  As with any marriage proposals, His offer should be weighed to see if you should accept it.  Start here with the ‘plan’ laid out in the beginning with Hazrat Adam, here to see how Hazrat Ibrahim foresaw the plan, here how Nabi Musa/Moses showed how the Redeemer would pay the price, and here to see how it was predicted long beforehand so we can know it really is Allah/God’s Proposal.

Another adaptation of the Book of Ruth in film